Specialists in poignant and melodic short stories (both original and traditional) about life, love and remembrance, the trio’s work has been described as “bold and brilliant” by the likes of The Observer, and “the best folk and acoustic from Britain and beyond”  said  Mark Radcliffe on BBC Radio 2, when they appeared  live on his show in December 2019

Their fourth, and most recent, album is called The Victorians and features a collection of largely forgotten Victorian Street, parlour, work, popular and rural songs and stories reworked for contemporary ears. The result is a thought-provoking and musically stimulating insight into the period, including compelling tales of wife auctions, political corruption, bare-knuckle boxers and naked life-savers.

At this show the Lancastrians will perform material from their Victorian album as well as from their acclaimed back catalogue. Such is the outfit’s reputation for providing top quality live shows – full of poignancy, humour and great audience rapport – they have twice been invited to perform at the English Folk Expo, the annual international showcase of the best acts on the English folk circuit.

Tim Chu and Ian Bailey, the two talented professional singer-song writers from the North West of England, make a welcome return to our Friday Night at the Horne with their show.

They have grown up listening to Simon and Garfunkel’s music with both composition and vocal blend having a strong influence on their respective professional careers. They deliver the music in their own unique way that honours the original recordings, without falling into the regular tribute act category.

There are no costumes, wigs, or makeup! Just two great musicians producing an ambient collection of some of Simon and Garfunkel’s much loved hits.text accompanying image

“Got dragged to this gig by some musician friends’ whilst visiting the UK. I expected to watch another cheesy tribute act…wow! I was so wrong! One of the best acoustic interpretations you will witness. Go and see these great guys for sure”

The Busquitos play a very catchy mix of brilliantly played music and dazzling, funny entertainment that will put a smile on everyone’s face! The fun they have playing their music rubs off on their audiences as enormous amount of positive feedback they get every show proves.

Musical entertainment for all ages!

They will take you on a journey of musical genres Swing, Calypso, Rock and Roll, Classical and everything in between.

They love to interact with their audiences and their enthusiasm is contagious. And if the time is right, they will mingle, play a serenade, organize a limbo or get the audience to sing along to one of their jazzy tunes. So we are in for an entertaining night!

Said to be one of the most dynamic acts to come out of Holland in recent times, they have performed at some of the biggest festivals in Europe and Asia.

with Ben HOLDER and Stuart Carter-SMITH

An evening with the music of the Guitar and Violin virtuosos Django Reinhardt and Stephane Grappelli played by two of this country’s finest exponents of this style. Expect to be flown back in time to the dance halls of the 1940s with this homage to the Quintet of the hot club of France. This really was the “Swing” era, full of irresistible rhythms and all the musical indulgence there was to offer.

Ben Holder (Violin, Vocals) and Stuart Carter- Smith (Gypsy Guitar) have toured together extensively throughout the UK, Europe and the USA over the last 10 years and have been privately booked by such A list clients including Elton John and the Beckhams to name a few.

Ben Holder is one of the most gifted and exciting young jazz violinists in the UK. Taught classically from the age of six, he studied at the Birmingham Conservatoire. During his classical studies, Ben began listening to Jazz – classic masters such as Benny Goodman and Oscar Peterson and of course the great jazz violinists including Grappelli, Joe Venuti and the awe inspiring Stuff Smith.

Although initially Stuart Carter-Smith studied and performed the classical guitar, he soon fell in love with the music of Django Reinhardt and his post-classical studies took him to work with some of the finest names in that genre both in the UK and overseas.

so you will receive a little chocolate heart when you join us to listen to the Romani music adding a little Romantic touch to the evening! 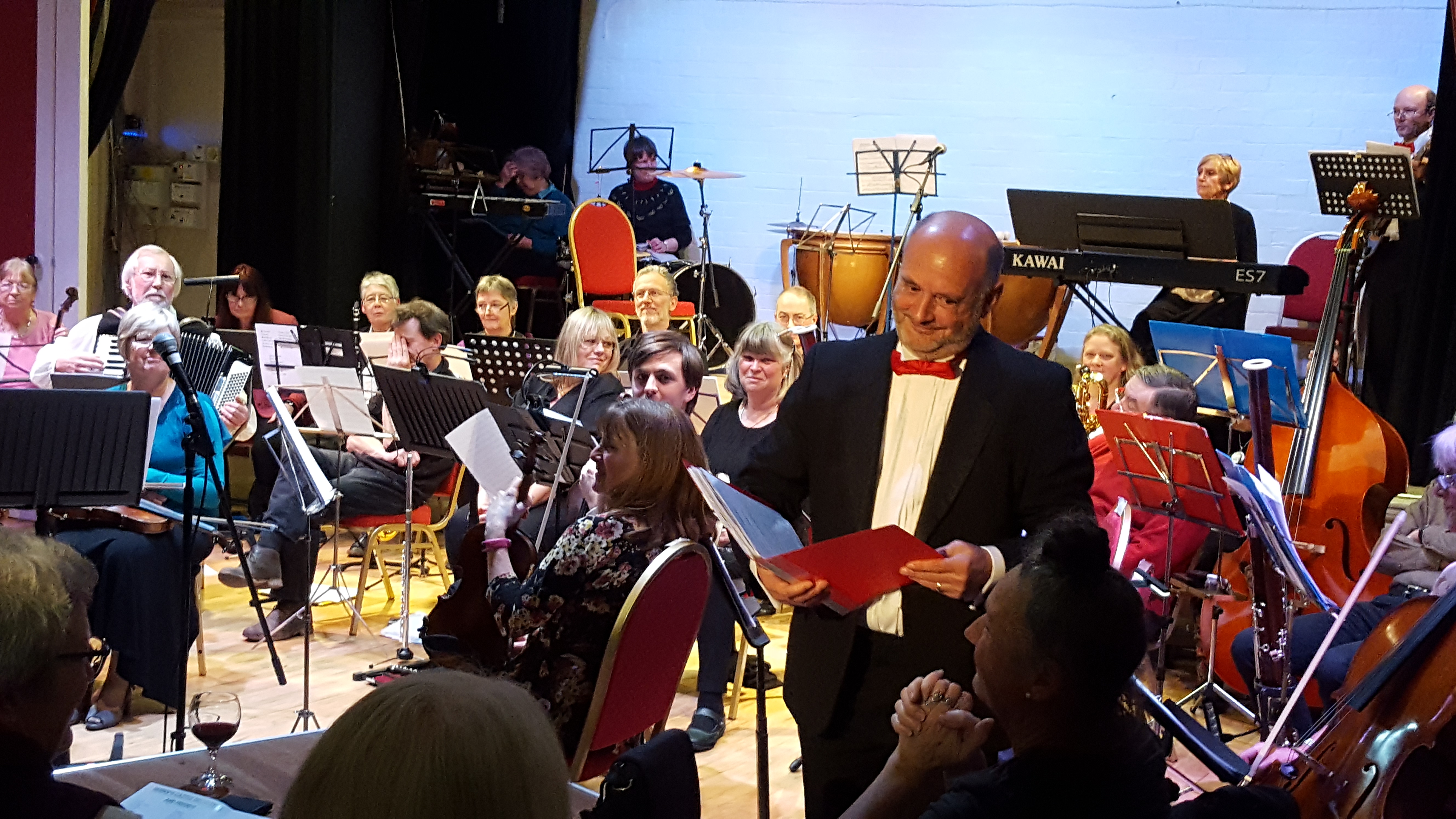 with the BISHOPS CASTLE ORCHESTRA

Come and enjoy a great start for the New Year!

There will be a melange of items from many composers including Holst, Vaughan Williams, Berlioz and Delibes.

The evening will be hosted by the inimitable David Foster, musician and raconteur of renown. To provide a truly French/English soiree we are proud to present Louise Le Boutillier, the superb operatic contralto and Kay and Trevor Hedges of ‘Rapsquillion’ fame giving us French arias and English folk song. Aussi professeur Chris Lacy flautist extraordinaire.

“This will be our fourth two-yearly concert and the Orchestra look forward to seeing you again”.

For your further enjoyment, and included in your ticket will be a glass of French wine or soft drink and also a petite patisserie (baked by Mr Bun). 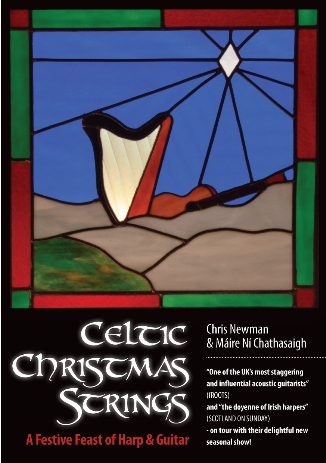 Maire and Chris’s alchemy on harp and guitar creates a very special magic at all times. Individually famed for originality, innovation and virtuosity on their respective instruments, together they have created one of the most distinctive voices in modern acoustic music and tour worldwide.

Their new Christmas show brings together a blend of traditional Irish music, swing jazz and blue grass together with festive favourites delivered with a fresh voice with arrangements that are both moving and beautiful, performed in their characteristically heart- warming style.

Their music is delightful and their relaxed professional ability is outstanding. This is a festive feast for the Christmas Season, joyful and uplifting. 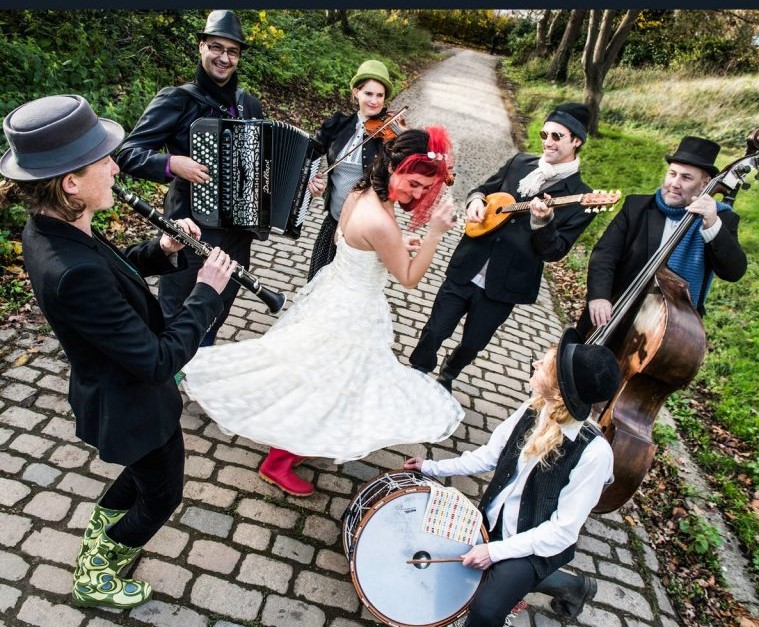 “Among the finest klezmer ensembles on the planet”

Their members hail from the UK, Serbia, Sweden and Turkey. They bring together the stunning polyphonic melodies and intricate rhythms of Bulgaria, treasured traditions from Serbian villages, exhilarating Gypsy dances from the Romanian mountains and soulful Sephardic and klezmer music from Turkey, Macedonia, Poland and Ukraine.

She’Koyokh is a Yiddish word meaning “nice one”. They are currently touring their fourth album, First Dance on Second Avenue, which was nominated in the 2018 Songlines World Music Awards.

“one of the finest British-based exponents of global music”.

My Sweet Patootie is a non-stop acoustic show from Canada, embracing the fun that makes live music so intoxicating. “With a sly wink and a grin, they draw you into a world of carnival barkers and nostalgic romantics, making you feel part of it”.

So expect shades of vintage swing, country blues, folk and ragtime in an uplifting and humorous show, performed with vocal harmonies and instrumental virtuosity.

“With their arsenal of instrumental virtuosity combined with alternating humour and sincerity, and unflagging energy they filled the hall with joy”

“A winning combination of world-class musicians and great entertainers“

“Swing, folk, country and nostalgia collide head-on in a most pleasing fashion ….. My Sweet Patootie 4 out of 4 stars! 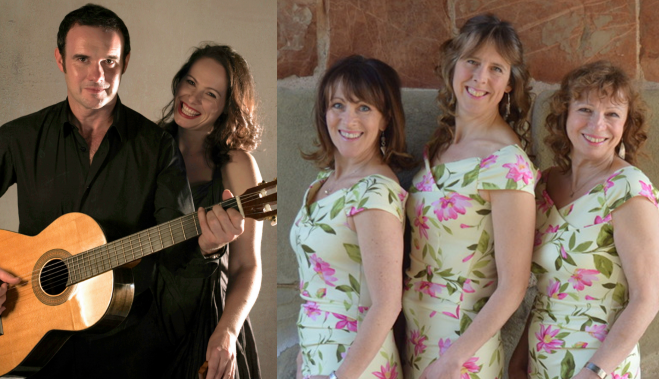 Welcome to our New Season

Welcome back to Friday Night At The Horne at the Silvester Horne Institute. Help us celebrate with a free glass of wine, or equivalent as tonight we launch our 2019 Autumn Programme of music and entertainment.

This evening will be both enjoyable and entertaining as it is a special double bill. We bring together our popular Trovatori who are based here in the Strettons, and Sasscappella who are joining us from the Malverns.

Trovatori are Darren Clarke (baritone ) and Caroline Clarke (soprano). They provide their own accompaniment on classical guitars, and share a passion for singing, travelling and discovery. They explore the musical world for all the best songs that include opera, operetta, traditional, folk and ballads.

Their talents take them all over the world, and they are much in demand as guest artists for cruise companies.

“……..a very talented duo that went over beautifully”

SassCappella are a very entertaining three part A cappella group. Janet, Marie-Therese and Gwen bring an eclectic musical mix from Jazz to pop and their original songs include some comedy items!

SassCappella have been treading theatre boards and singing from their early days and now love being part of this A cappella trio. Their performances includes some piano and guitar playing as well.

With perfect harmonies this dynamic sassy trio make it their mission to entertain and have a good camaraderie.

Ticket £12 include a glass of wine to push the boat out! 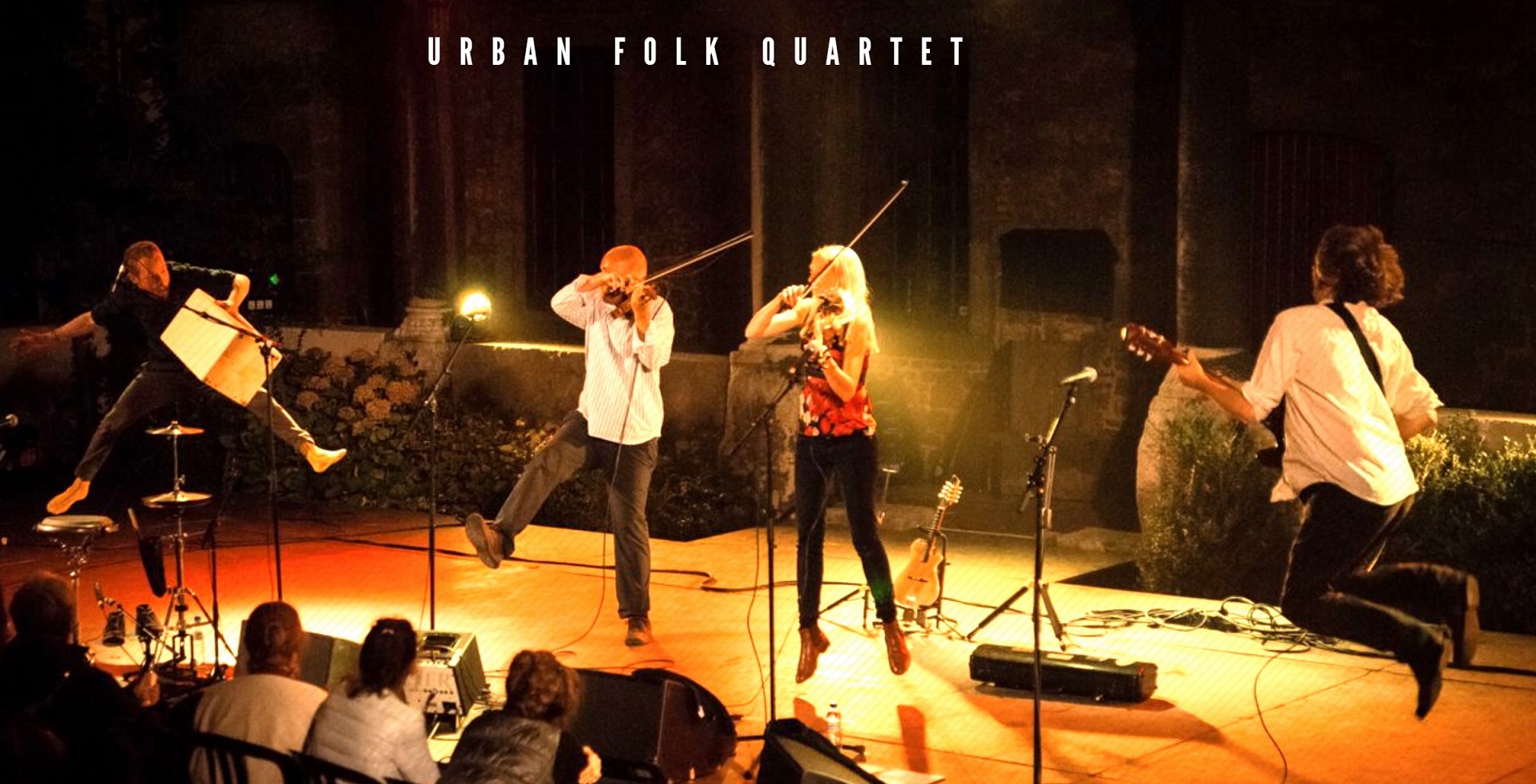 The Urban Folk Quartet are unlike any folk band you have ever heard.

“UFQ show a great deal of inspiration and innovation” the Guardian

Just as English country dance meet the big band Jazz, their approach is to embrace every influence that makes sense of their time and place with their music.

From funk grooves to middle-eastern melodies, afrobeat to north Indian rhythms this is fiddle-led music that draws heavily from celtic dance forms and traditional song but from there on in it is unlike any folk band you have ever heard.

UFQ is a truly international band. Foreign touring and globally- influenced music have been at the heart of what they do since day one, have appeared at concerts and festivals across the world.

The first of those phenomenal fiddlers is Galician Paloma Trigás (Fiddle, Vocals), who has shared stages and recorded with with the likes of The Chieftains, Sharon Shannon and Altan, during her tenure touring the stadiums of the world with Spain’s biggest folk star, Carlos Nuñez.

Dan Walsh (Banjo, Guitar, Vocals ), whose Grandparents live here, is touted as one of the finest banjo players in the country as well as a gifted singer and guitarist, Dan (Seth Lakeman Band, The Levellers, Walsh & Pound) joined UFQ in 2014, Banjo player/vocalist/guitarist.

The lineup is completed by Tom Chapman,( Cajón, Percussion, Vocals) widely considered to be the most accomplished and innovative cajonero the UK has to offer. Tom took inspiration from the cajoneros of the world to become one of the first UK musicians to adopt the cajón as a serious first instrument.